Well we’ve been in Argentina for a week and feel like we have already consumed our body weight in MEAT!! It’s gotta be done while in Argentina and when offered to have asado (traditional barbecue) all weekend you really can’t say no! When ordering the meat at the carnicería (butcher) its normal to order half a kilo of meat per person!!  I think when we leave Argentina we will need to turn veggie for at least a week!  We have tried some lovely typical food but of course we should start with steak since we are in the steak capital of the world.

In Buenos Aires we wandered around the streets and found a nice restaurant to attempt to order a steak in Spanish. Chris done really well and managed to order a bife de chorizo con papas fritas for him and a bife de chorizo con salada for me. Bife de chorizo is what Argentinians call a sirloin steak. We even manage to order a bottle of vino Rosso (red wine) and a bottle of Agua sin gas (still water). The steaks were delicious and very juicy, the chips were a bit under cooked but the salad was lovely and fresh. Our first steak was overall a good experience.

On Friday we had traveled two hours down to our friends hometown of Dolores. His dad offered to cook us asado (Argentine BBQ) He got the typical meats such as chorizo, riñón (kidney), chinchulines (intestines), morcilla  (a type of black pudding) and a huge pierna de cordero (leg of lamb). He stuffed the lamb with breadcrumbs, pepper, onion and garlic and fired it on the grill. We had the morcilla cold and it tasted ok but I would have preferd it hot. I felt like I was doing a bush tucker trial with the intestines it was extra crispy on the outside and gooey in the middle. I let Chris finish mine at least I tried it. The kidney was better than expected and actually nicer than kidney we would have in our good old steak and kidney pie. The chorizo was mega tasty it was more of a flavoured sausage rather than the cured meat as we know it. Last but not least of course the lamb was absolutely to die for!! Amazing first Assado experience!!!

Bushtucker trial… Would you try?

Saturday was party night Pancho was grill master tonight and a bunch of his friends were coming round. He had bought asado (this is also a cut from the ribs), bife de chorizo, chorizo, morcilla and tapa de asado (rib cap). All of the meats were deliciously cooked on the parrillia (grill) and served with lots of salad and bread. One of Pancho’s friends had brought round his own chimichurri sauce which complimented the meat perfectly. We had a great night with lots of wine and beer being consumed. Although some of Pancho’s friends didn’t speak English it was amazing how much you can be involved in the atmosphere through body language, expressions and our small understanding of Spanish. As we thought the party was dying off at 5am, we found out it was just time to go to the pub which is totally normal?!? In the bar we tried a home brewed beer which I didn’t find too nice or maybe I was just in need of my bed!

On Sunday Chris being a chef of course he wanted a shot of being grill master so we headed to the supermarket and bought a 2.2kg cut of vacío (flank) to share between 4 people. We also got some fresh corn and peppers to grill and some nice salad to top up our vitamin intake. He set up the asado without any help the correct Argentinian way. The meat was again delicious. I really don’t think you could beat the steaks in Argentina as the cows are well looked after and look very healthy when you see them in the spacious fields with lush green grass. Pancho’s Dad gave us a few of his traditional recipes to experiment with when we get a chance, look out for when we post about making them!! He also told us to open an Argentine steak house at home and he will visit us. Maybe one day eh? Since we are catching our dreams! 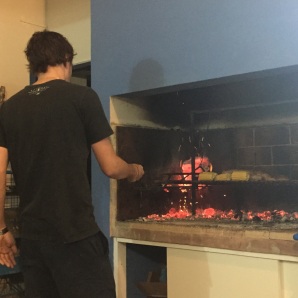 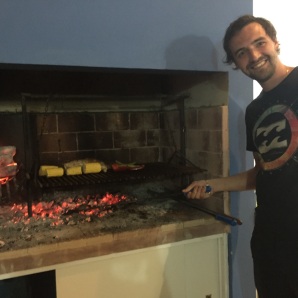 Look out for our next post on more delicious Argentinian food: Choripan, Empanadas, Italian influence and Sweets!