We got a taxi from the hotel with the group we had met up with last night. The taxi took us to the grandstand where the tickets were 80,000 cop, £20 each but we walked down 3 blocks and got tickets there for 10,000 cop, £2.50. This was a much better experience as we were in with the regular locals who were a lot of fun. As tourists we attracted a lot of attention especially as we were dressed as traditional Colombians. This attention usually consisted of “hey gringo” and spray in the face with an espuma (foam spray) then having a packet of cornflour tipped over your head. This was all in good spirits and part of the Carnaval fun so we bought an espuma  6000 pesos, £1.50 and started a few foam wars with the locals. We had a few kids sitting beside us and a four year old boy sprayed us non-stop for most of the day!!!  The locals were sharing their snacks with us and one family even gave us a whole container of arroz con yucca y queso (rice with yucca and cheese) which tasted really good. We consumed plenty of cervezas and finished off the rum from the previous night, it had gotten really warm after a few hours in the sun. We had an absolutely fantastic day as we had no idea what to expect and it was no stop fun all day. 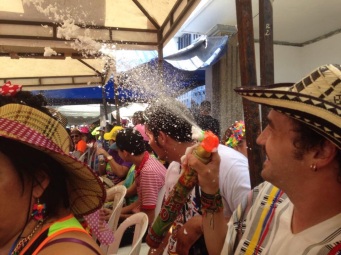 Second day: Tourist experience
We got a taxi back to the grandstand area and got tickets here for 15,000cop £3.75 the mood in the crowd today was much more calm this may have been due to everyone being up late partying last night. We did get a much better view of the parade as we got front row seats. The parade also went on a lot longer today and we were there from 1 so we hoped to see the end but left at 6 as there was sill more parade than we could see all the way down the street.

The Parade
On both days the parade was so colorful and the music was energetic on both days getting the crowds tapping and on their feet boogieing.  The floats were decorated in flowers and came equipped with massive speakers blasting salsa and other various local music at full volume. The dancers were all dressed bright and beautifully in traditional outfits from all over Colombia. It was wonderful to see all generations participation from children to the elderly demonstration of their skills. Each region had a group of traditional dancers showing off their tribal roots. It was great to see although we didn’t fully understand what it all symbolized, we could still observe and appreciate the pride and passion that Colombians put into their celebrations. The performers were so happy to be there the had huge smiles from ear to ear. They would run up to the crowd for cheers and would pose for photos. They would even come over to get some water or a shot of rum from someone in the crowd. 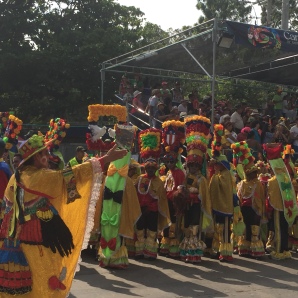 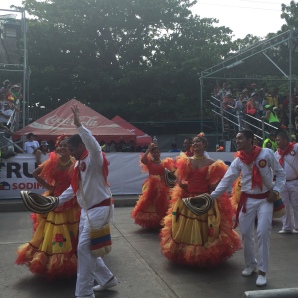 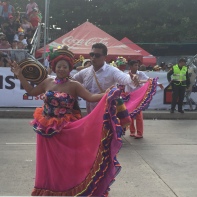 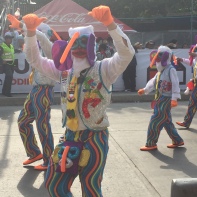 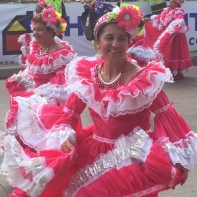 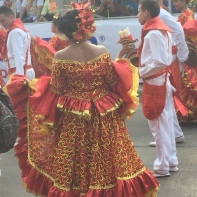 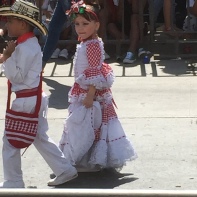 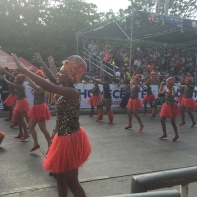 Hotel San Macros
We got very lucky and had trouble with booking a hotel for carnival and ended up booking 3 hotels. We were going to have to change hotel on the Saturday and Sunday but luckily for us they squeezed us in at San Marcos both nights for the same price as we had paid for the other nights we were staying saving us around £100 from moving and a lot less hassle. The staff were so nice here especially the owner who organised a group of guests to go out for a party on the Friday night. He came with us as our guide also making sure we all got in the taxis and paid the correct price.
Nightlife

We went to a stage in the la Plaza de la Paz where they played local live music. The crowds were big and everybody was in good spirits as Carnaval was kicking off. We stayed at this place till around 10 the we headed to a street party at La Troja 8 on carrera 8. The club was so busy it had people crowded inside spilling out onto the street which created a huge street party. The massive speakers blasted the music around the streets and the crowd danced all night long.   People were selling beers on the street from eskies and there was a bottle shop across street where Ron got a bottle of rum that was called Ron Medellin so it was quickly renamed Ron’s rum. Firstly we finished off the 250 ml then he went back for a 500 ml which made its way out to Carnaval the next day. The only thing about the street party was that el baños (the toilets) were inside the club and it took us over half an hour to squeeze in we even gave up and turned back then decided to go again. All along the way we were being scooshed with foam. Definitely a fantastic night with great people to begin carnival madness! 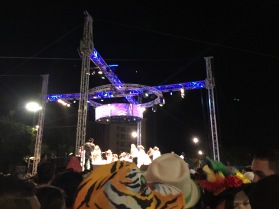 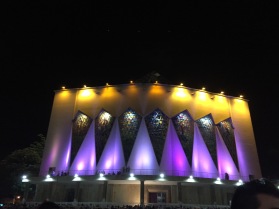 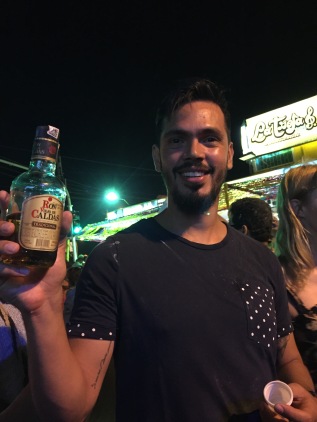 Saturday: Carrera 8 clubs
We headed back to La Trojas as  we had such a good night last night but it was much quieter tonight. So we walked down the street to check out some of the other clubs out. We were a bit of a smaller group tonight so it was easier to get in and move around in the chaos of Colombian parties and being ‘gringo’ attracted some local girls to dance with us we even got a number to meet them for carnival the next day but we were hungover and didn’t manage to meet the again. A lot of people like to party on the street so we bought some beers and joined on the road. We even managed to get free salsa lesson after being asked to dance and looking like we had two left feet haha. . We had another fun night but we were all pretty tired from a full day of carnaval.

Sunday: Calle 74 Carrera 45 @ La Troja
Tonight we headed to a recommended local after party in the street where the dancers from the parade were going to party but when we got there they had taped off the street I’m sure they would have let us in but we didn’t just want to turn up uninvited so we asked the taxi to take us to the clubs and he dropped us at la troja, but in another area from the previous nights. It had a no other clubs around so it ended up being another huge street party with loud music, foam and flour!!  We had another awsome night dancing and getting photos with locals as we had dressed up again for out last night there.

Each night locals were all so friendly and genuinely interested in where we are from when we say Escocia they usually ask about our skirt then tell us that Colombian ladies were a skirt but never the men. One guy even said highlander. One of the most popular drinks in Colombia is Old Parr whisky from Edinburgh we could hardly believe it especially as we had never heard of it before.

The local street traders were just a short stroll from our hotel. Each street had a different thing to sell, one row full of fruit and veg, one with shoes, and cobblers, one with meat, one with clothes, lots with carnival accessories and outfits. Needless to say we got wonderfully lost wandering around the markets. From 7 am they get all set up then packed down around 7 pm. And then the night shift team comes to clean the streets and the full street is empty and very clean after all of the busy hustle and bustle of daytime trading. We met a lot of people worried about going around the markets but we enjoyed it and didn’t feel intimidated one bit. Everyone was friendly and even with the lack of communication we had a laugh with the market traders Shouting “hello Johnny” out of nowhere we heard a voice “do you speak English” a little boy said “good afternoon”

Food
We pretty much ate arrepas for breakfast and fresh fruit from the markets then grab a kebab stick at the carnaval plus our arroz con yucca y queso on the first day. We also ordered food from a local takeaway hoping for a salad but we got some lettuce on top of half a box of chips and processed chorizo with ketchup all over it not the healthiest of meals we couldn’t even finish it. The bakeries near by the hotel were a hit and a miss if you got there early when it is freshly cooked it was very tasty but sometimes it had been lying all day and wasn’t the best.