Our time in Montevideo was good although we feel that we spent a bit long in big cities by this point as we had just come from Buenos Aires. We would have liked more time in Uruguay to visit some small towns and rural areas as we have heard many good stories from other travelers. As we had travel commitments at this point we had to rush through Uruguay quicker than we would have liked. Anyway here is some of the things we enjoyed while in the city;

The People
The Uruguayan people we met were very chilled and friendly. We couldn’t believe that they seemed to drink even more yerba mate than the people of Argentina. In Uruguay  almost every second person had their mate cup in one hand and thermos under their arm while walking down the street, they love it so much the cannot put it down. There is a very big hippie culture in Montevideo which adds to the chilled atmosphere. 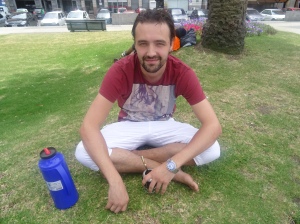 This is an important square in the centre of the city which separates the city from the downtown. There are many grand  buildings, such as the Solis Theatre and the workplaces of the president. Many locals come here to sit and drink mate or to relax on there break from work. 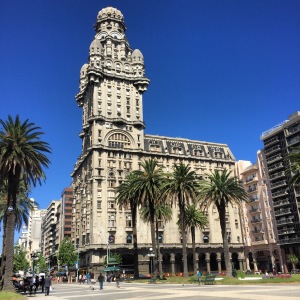 This is a memorial of a local hero José Artigas and his part played in the independace of Uruguay. It was built in the 1930’s and Artigas’s remais are kept underneath the statue which is guarded by Blandegues de Artigas’s. We stumbled across it in the Plaza de Independencia when Chris was curious about what was down the stairs.
Old Town
We strolled around the old town people watching and looking at the amazing architecture and differences of the buildings. Along the way there are plenty of little market stalls selling things like sun hats, mate cups, gifts ect. There are many restaurants around the old town, we decided we had to try the famous “Chivito” this is basically a steak sandwich it was really tasty although we were trying to be healthy and order salad and no chips it came with chips and no salad. The waiter was really rude towards the end and showed us our bill then gave us a calculator with the price he wanted us to pay with his tip already added, we thought it was some form of tax!!

Marcado Peurto
We read reviews for this market and decided it was a must. When entering the market you are hit with delicious smells of meat sizzling away on the grills, there are some lovely little shops but most things are higher priced due to it being a bit touristy. We maybe shouldn’t have ate due to our budget, the food was good but wouldn’t say it was worth the price though we ended up spending $35 on lunch for a chicken salad, asado and 2 bottles of water. We were so full up so we didn’t need to eat for the rest of the day which was great for the wallet haha.

Ramblas/Beaches
At the coast of the urban city there are  beaches, the only thing is the water is pretty brown as it meres with a river. We took long strolls along the beaches whilst lots of locals were in swimming and having family fun. There are plenty of facilities close to the beaches such as swing parks, outdoor gym equipment, football nets, sports courts. We really enjoyed the beaches although we did have to watch out while walking for the dead fish that had been washed up on the sand. If you walk all the way along the beach and climb up the hill you can get photos with the Montevideo sign. 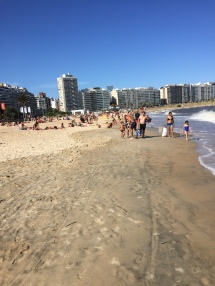